On June 13, 2017, Protection Review held it's annual Adviser Roundtable. As always we enjoyed a frank, and at times heated exchange of views. The type of discussion you would expect from a group of people passionate about the protection industry.

As is the usual practice with the Intermediary Forum, we assembled a group of leading advisers and specialist consultants and businesses. Two leading reinsurers were also in attendance. To ensure good discussion and avoid inhibition in making comments the identities of the participants are not revealed. The group was full of highly experienced professionals and experts in protection and met at Swiss Re in London on 13th June 2017. 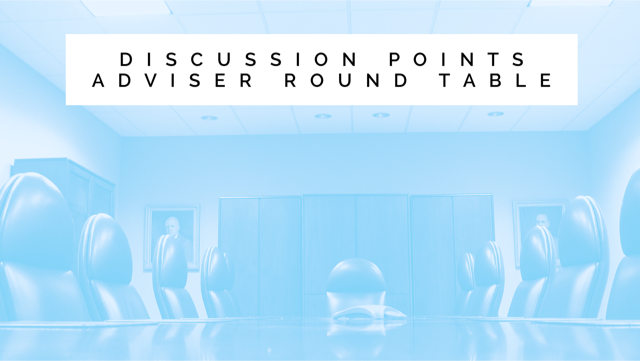 Where is the protection industry at the moment?

There was a general consensus that the industry is not in a particularly good place at the moment. The group were at pains to point out that that the role the industry plays in society was vital but they did not feel it was operating anywhere near as well as it could.

'The protection industry is woefully inefficient and significantly difficult to transact with - compared to the wealth market it is very inefficient.'

It was also stated that;

'The mortgage market is even worse!'

'The protection market has gone down because it has become more difficult to engage with it.'

The group debated the impact of price on the market and were divided on how significant it was;

'Price is a red herring.'

'When you're independent you know who is cheapest but when you tie it completely changes your mindset about price.'

'Advice very definitely comes above price in terms of importance.'

'I'd like to know the rebroking stats- who when rebroking sells increased cover or just goes for the lower premiums?'

There was also a feeling that the focus on price caused churn in the market rather than expanding the amount of new business written.

'Aggregators by their activities and positioning, cause policies to be sold over and over again rather than increasing the amount of business written.'

There was a widespread view that the process by which mortgages are sold was failing many customers who often failed to buy very necessary protection at the same time. There was exasperation about this and a desire to take action. It was the length of the process which led to advisers not being willing to burden clients with the stress of buying protection as well. There appeared to be real customer detriment here.

'Do we need to go and bang on the doors at Canary Wharf about the mortgage process?'

'What makes some advisers sell protection with mortgages and some just go straight on to sell another mortgage?'

'Some businesses just want to turn the handle, others want to do the job properly.'

'If you can charge an admin fee and a procuration fee it changes the economics coupling mortgages with protection significantly.'

There were also other views about why the market was depressed;

'People still don't believe we are going to pay their claim.'

'The crux of the problem is that sales have gone down because there are fewer people selling protection.'

'The majority of advisers look down their nose at protection.'

'It's a very  confused  market - the stats on production put out by various organisations contradict each other.’

What obligations does this place on those in the market now?

'Those on the inside who have experience of protection have got a responsibility to educate advisers.'

There was a feeling that life was difficult for advisers who weren't part of a large network;

'The fragmentation of the industry has caused problems for advisers outside networks.'

'People turn into protection salesmen when they can't sell anything else.'

But are there flashes of hope?

'If there is no money in DC pensions will that group shift to protection?'

Where have all the protection salesmen gone?

One important theme was the drop in advisers who could sell protection. There were 285,000 advisers in 1989 but only around 26,000 now. Was it any wonder that protection volumes were dropping?

'There just aren't enough people out there to sell protection.'

There was also scepticism that we could train up a lot of new protection advisers especially given public scepticism about the value of the product.

'There isn't enough money in the boardrooms of providers to finance the training of advisers and salesmen.'

'Providers aren't getting the news out there about protection.'

'Consumers haven't changed their impression of protection in the last decade mainly due to the PPI scandal.'

How does the protection industry change the situation?

'It is up to the providers to change things.'

'One thing we should be tapping into is peoples' aversion to losing money.'

'We shouldn't be frightened about scaring people.'

'Media coverage changes the public perception of risk- it is important we give them positive stories.'

'It is our job not the regulator's to increase our market.'

'Where is the ABI in all this? Shouldn't they be driving a generic advertising campaign?'

'The mindset of provider boards is the issue.'

'Advertising is not the issue- lots of companies advertise protection on TV. To say we don't advertise is a myth.'

There was a general feeling that while there is specific company advertising, there could be a void in addressing the overall value of protection generically.

One of the main themes of the forum was the lack of supply in the protection market, particularly in terms of the available distribution of products.

'We are seeing specific language - based salesforces.'

'We have two regulators and one is the Ombudsman.'

'One thing that is clear is that we don't understand buyers and their needs.'

'But do people actually know what their needs are?'

'People don't even remember what cover they have!'

'Imaginary Cover is a big issue.'

The discussion then touched on whether there was a value in an organisation that could educate, drive and energise the protection market.

'Yes we need an organisation promoting protection but it is up to the providers to do this- not the regulator.'

'Could we piggy- back on auto- enrolment? It will disturb people into writing protection.'

This market is obsessed with STP (straight through processing) rates. What does that mean to the customer?'

'People don't always need instant cover. Why are we focusing on this so much?'

'We don't always need an instant underwriting decision when a mortgage is involved.'

'It's the accuracy of the premium that matters the most.'

But not everyone agreed!

'My clients are looking for protection today, they want it in place quickly. If they have medical conditions it is taking a very long time.'

'UnderwriteMe is an example of the industry solving a problem it created for itself!'

'I'm very interested in what Stephen Mendel is doing at Bought by Many. Maybe the community- based approach is the right way to go to underwriting.'

How will protection grow?

The group were realistic about the challenge of changing behaviour to focus more on protection.

'The reality is that certainty of reward drives a lot of advisers.'

'Do we need to look to the Government to bring in compulsion to buy protection?'

'Disruptors will make the market wake up.'

'But the protection market may be too small for disruptors to deal with.'

'Google are putting serious work into a health- mapping tool.'

Other big questions and issues

'Why are we so allergic to contacting people on long-term contracts ......it's the lapse risk!'

'Effective distribution models communicate much more frequently than we do.'

'People have an attention span of about thirty seconds. It makes sense to add questions while a transaction is going on.'

'Millennials take huge account to their time which means that insurers have to be smart to get their attention.'

'Our CRM is so bad we start with a high cost and then start deducting!'

'Critical Illness has carried on for thirty years along a route with lots of added cover. A new product wouldn't look anything like CI does now.'

'IP is the best and most necessary plan but the rules prevent us from taking it out- things like state benefits and self- employed rules.'

'The market needs a product for self- employed people.'

'What about FIB with accelerated IP?'

'There is a fundamental untruth underlying our product structures.'

'Individual IP writers won't say if they will pay.'

'Early intervention in a claim is much more important than we have recognised.'

'Get people emotionally involved in their purchase.'

'If you're aiming at the Millennials the only TV they watch is Game of Thrones.'

'Maybe we need a Protection Tsar!'

'We need to make buying protection less complicated. The complication is the fault of regulation.'

'We need a better relationship with the Government.'

'And we need a consistent message to Government.'

'We can't target all Millennials - we need to segment this down.’

'We have to complete the task of covering non- Millennials.'

'We need to build better bridges with consumers.'

'Protection has tried to plough its own furrow.'

'We keep going on about awareness and the only time we sorted it was Seven Families.'

'Products must be simpler, more relevant and demystified.'

This was a lively and very constructive forum from a group that believes passionately in the value of the product but who have seen slow progress in getting protection to a wider base. Perhaps the biggest realisation was that we have had such a drop in the numbers selling the product that we cannot expect to emulate the production levels of yesteryear. Yet there remains such a belief that almost everyone needs protection that there is inevitable frustration that we have failed to deliver it in the last few years. Is the answer the promotional equivalent of Life Happens or is it a more concerted and directed conversation with Government. But who drives this activity and takes responsibility for the impact of the industry as a whole?